These salty sweet vegan bacon dates with almond butter are just the thing for your next party. Your guests will be popping them into their mouths – one after the other. Good thing it’s not hard to make more!

People, we are down to the wire! In comparison to many years, I feel really ahead of the game. Cards have been sent, most of the presents are wrapped, and now it’s time to start thinking about food prep.

This month David and I have been getting into the holiday spirit and giving our record player a workout with lots of old Christmas albums from our childhoods. Especially appropriate this year, I was even introduced to the Star Wars Christmas album.

(If you’ve ever wondered what to get a wookie for Christmas when he already owns a comb, this record has the answers you’re seeking.) 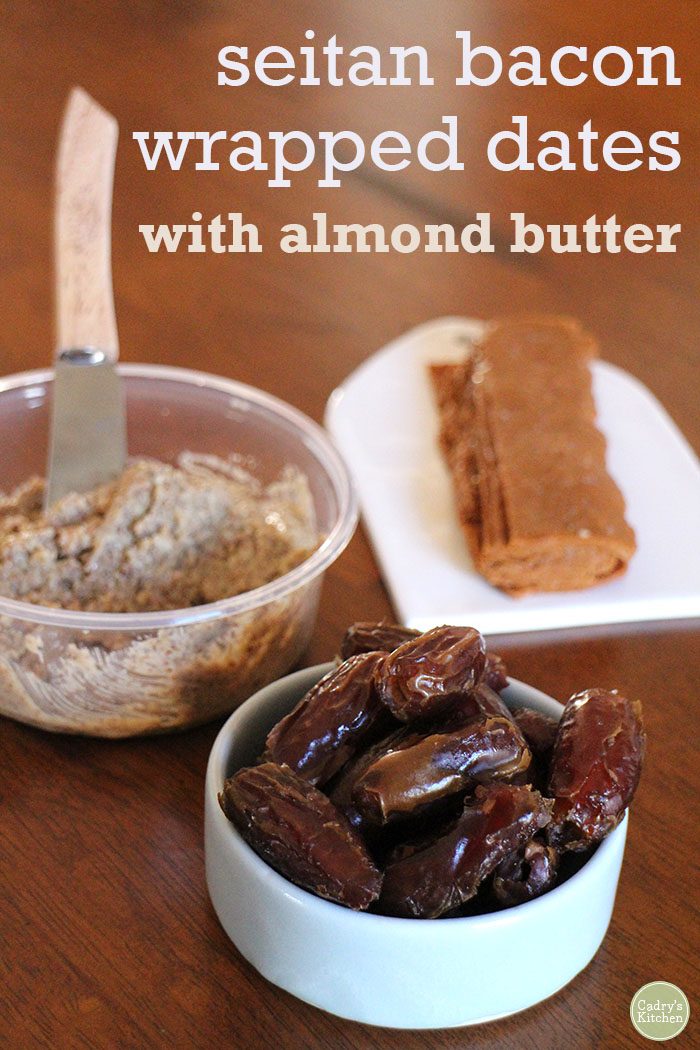 We had friends over for a little holiday get together with finger foods, games, and presents. That night, we put out lots of nibblies, I made vegan crab cakes.

Since we were already having cashew cheese and crackers, he simply filled the dates with almond butter. In theory, it’s kind of like Elvis’ famed sandwich, but with dates taking the place of bananas.

I have another vegan bacon wrapped date recipe on the blog using cashew cheese, and it’s delicious. However, when you want something faster that doesn’t require any prep time, these almond butter stuffed vegan bacon dates are the way to go. (They would also be great with pistachio butter!) 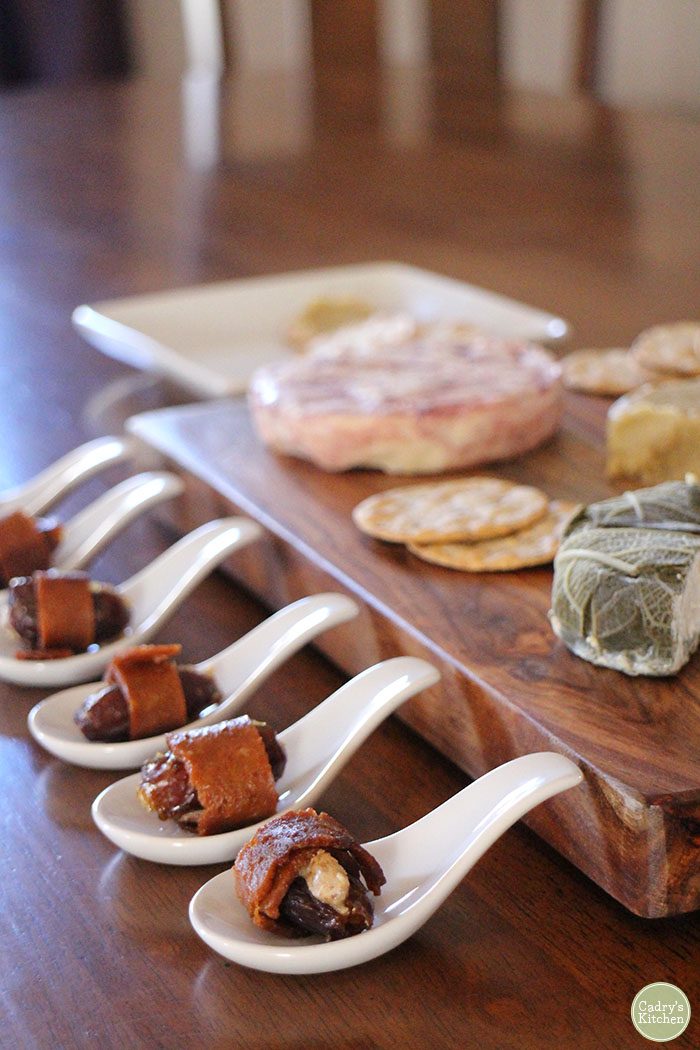 Since almond butter is mild in flavor, the nuttiness doesn’t overwhelm, and blends beautifully with the seitan bacon and dates.

We chose Deglet dates over Medjool for price reasons. (Deglets are considerably cheaper.) They also are smaller, which means there’s a better balance of flavors with the nut butter & seitan bacon.

The vegan bacon dates went over like gangbusters at our gathering with vegans and non-vegans alike. We made enough so that everyone could have 3 per person, but we easily could have doubled that amount. They were gone in no time.

They are the perfect size for popping in your mouth in one go. And the mixture of salty, sweet, chewy, and smoky ticks all of the boxes for a savory treat. 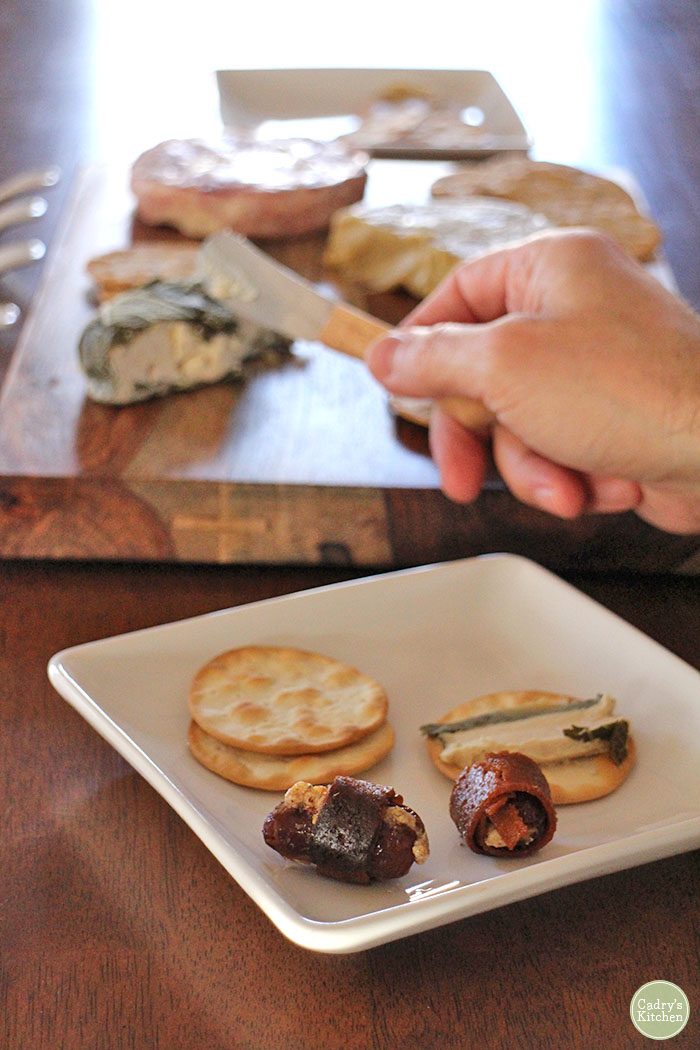 So if you need an appetizer in a hurry for Christmas Eve, Christmas Day, New Year’s Eve, or whenever, keep this idea in mind. The dates can be filled and wrapped ahead of time and then quickly fried when your guests arrive.

Happy holidays from me, David, Jezebel & Avon! I hope this season is filled with magic, love, and laughter for you and yours. 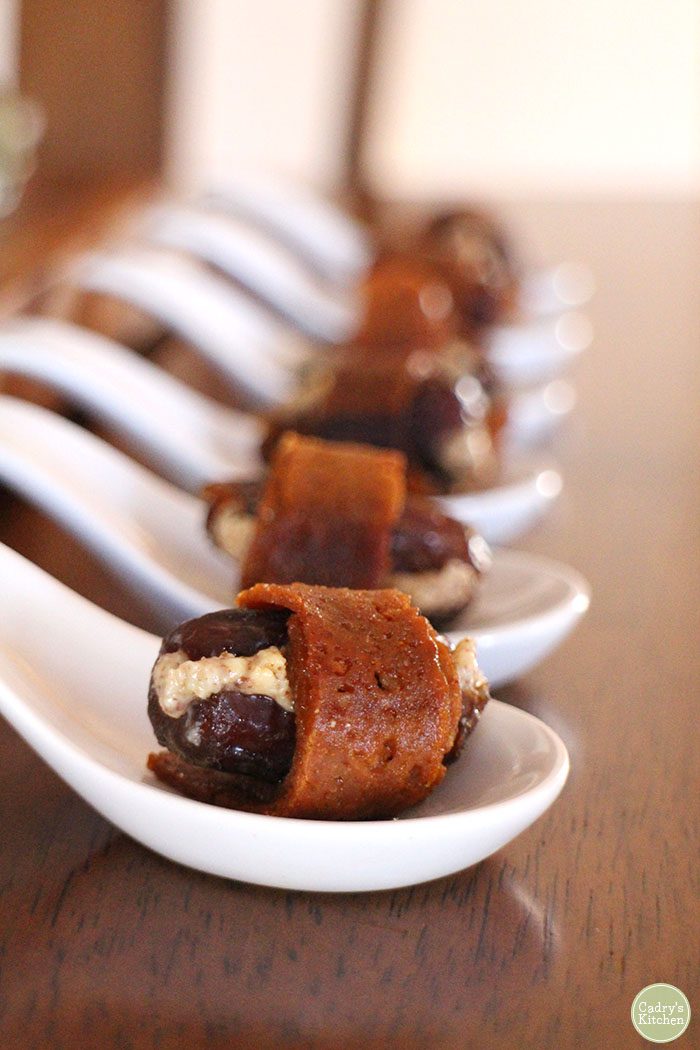 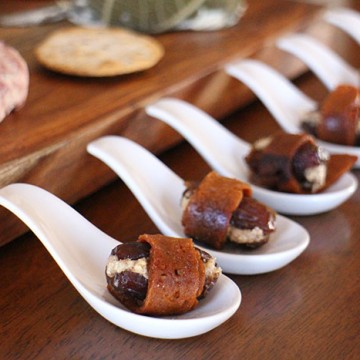 *If you're using a larger seitan bacon like Herbivorous Butcher, you will need less bacon. I also recommend cutting it down to a smaller size, so that it fits better on the dates.

I’m a longtime vegan. (14 years!) But I grew up eating a Standard American Diet. I know that all of us crave foods that are familiar, comforting, and delicious.