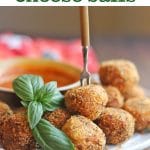 Fried almond cheese balls are an irresistible appetizer for a dinner party or holiday get-together.

They’re crispy on the outside, beautifully light & creamy on the inside. Enjoy them with marinara for dipping.

Unlike mozzarella sticks, which are gooey inside, fried almond cheese balls are velvety & smooth on the tongue.

Dunk them into warmed marinara for an appetizer that feels like a relative of arancini. 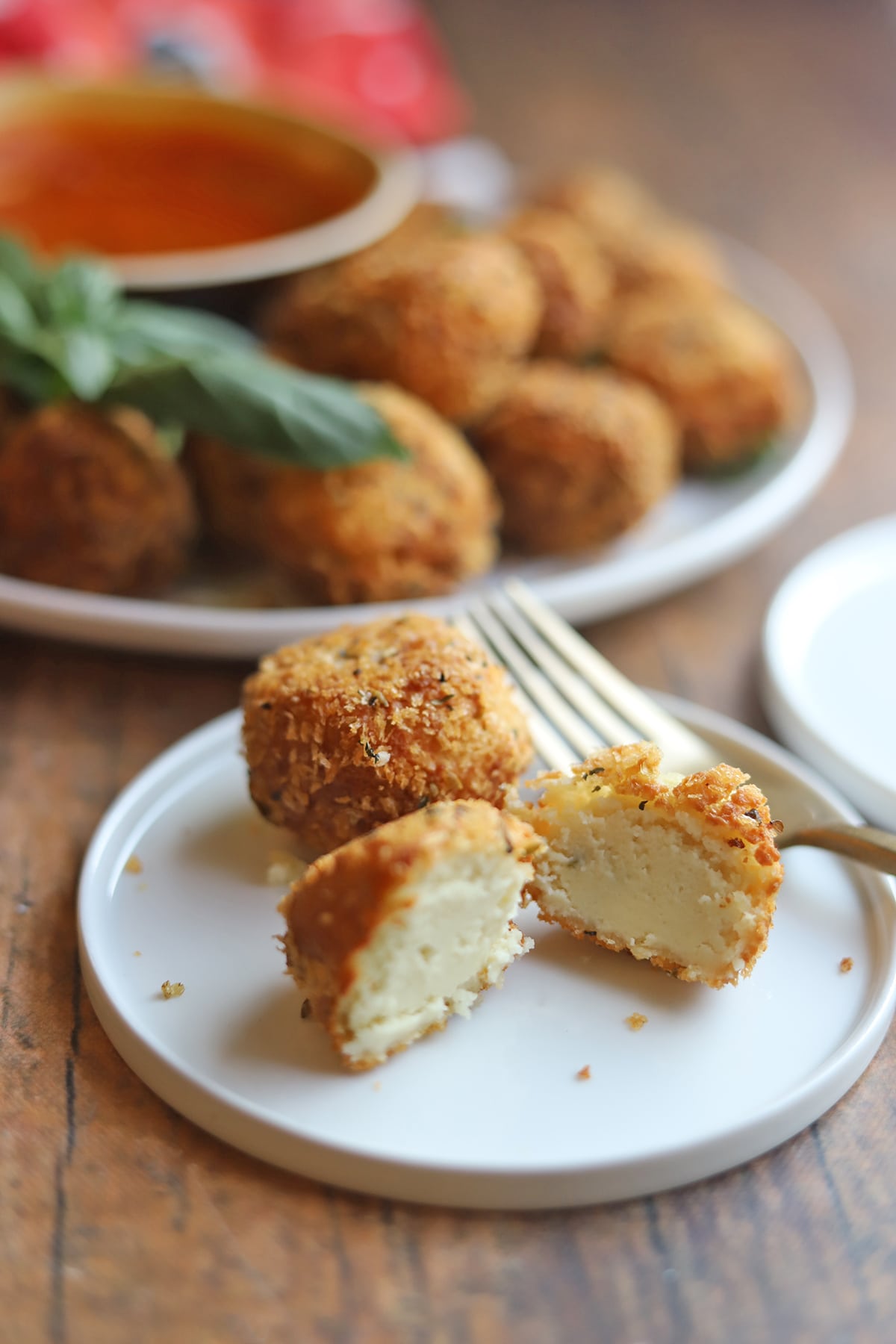 This recipe is a riff off of one of my favorite dishes, vegan feta cheese.

In the original feta recipe, the almond mixture is poured out of a blender and baked into a thick & crumbly cheese.

This time around, the blender mixture cools in the refrigerator until it condenses.

Then it’s rolled into balls, coated in seasoned breadcrumbs, and fried. 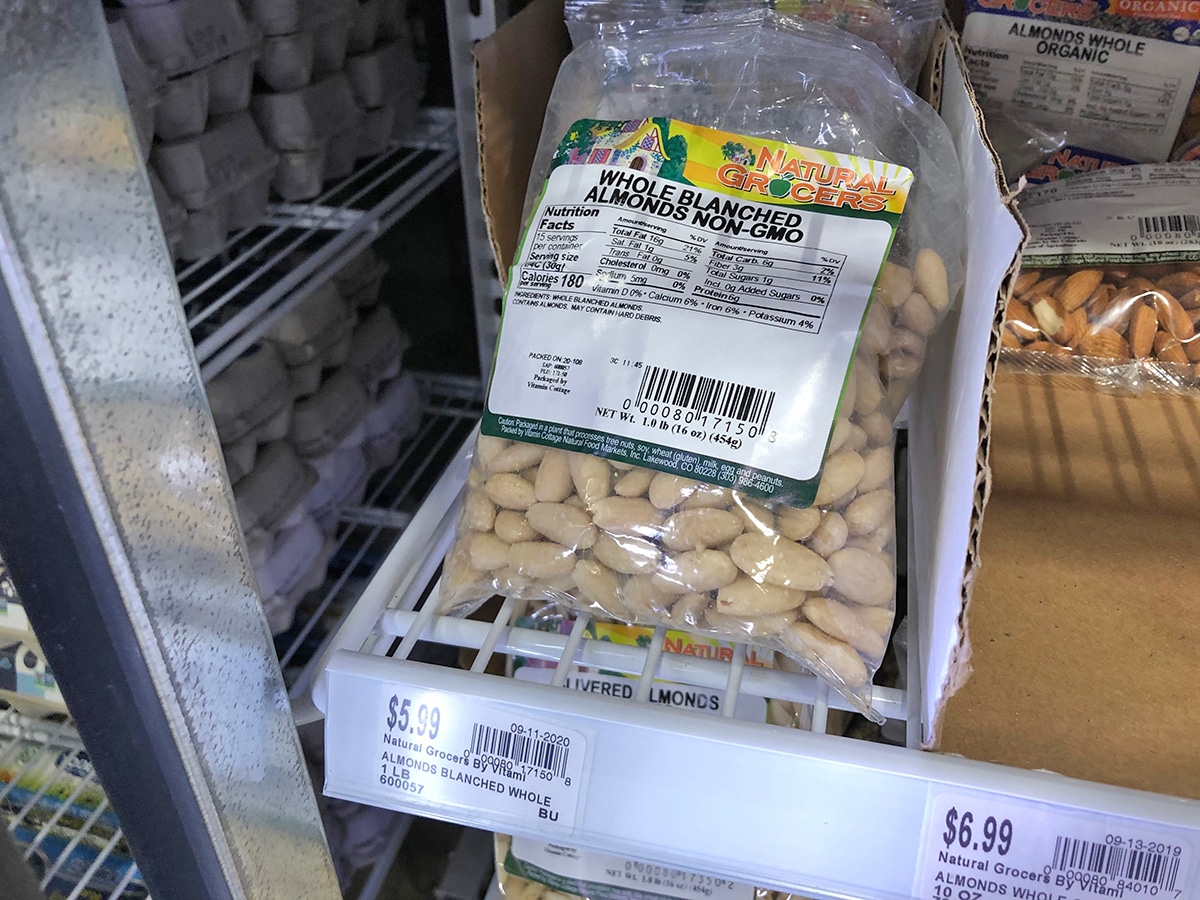 For the optimum texture and bright white filling, blanched almonds are a must for this recipe.

You can find them in grocery stores with other nuts. I usually buy mine at Natural Grocers.

Or you can hand-skin them yourself using any raw almonds. It’s not hard to do but takes a little bit of time on task.

Get all of the directions in this post on how to blanch almonds.

For added cheesiness and tang, I use olive brine in almond cheese.

Most often, I use the brine from jars of Castelvetrano olives.

Castelvetrano olives are mild & buttery in flavor, and the brine is light in color.

However, any olive brine will work.

If you don’t have olives around, you can use the brine from pepperoncini peppers (not hot peppers) or sauerkraut juice.

Any of these options work equally well.

Put the following into a high-speed blender:

Put the lid on the blender. Move it to the refrigerator, so that the almond mixture can cool & thicken.

You can refrigerate it for as few as three hours or up to four or five days.

When you are ready to fry the cheese balls, make a breading station.

Put the following on a plate: 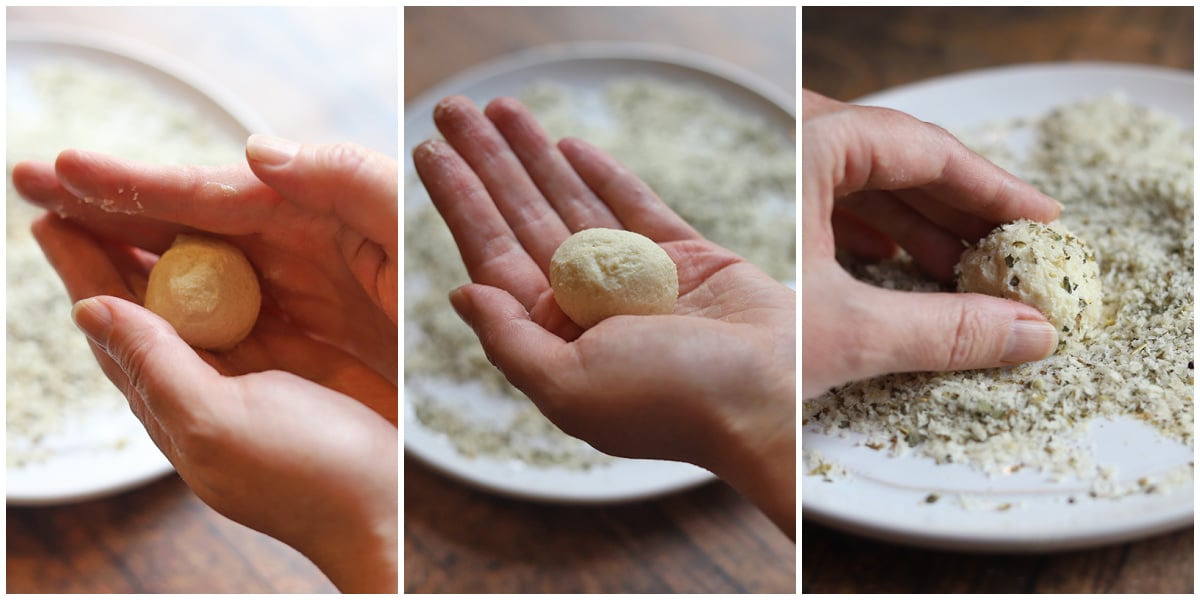 Use a Tablespoon to measure out almond cheese from the blender.

Roll it into a ball with your hands.

Roll the ball in seasoned breadcrumbs.

Keep going until all of the balls are coated. 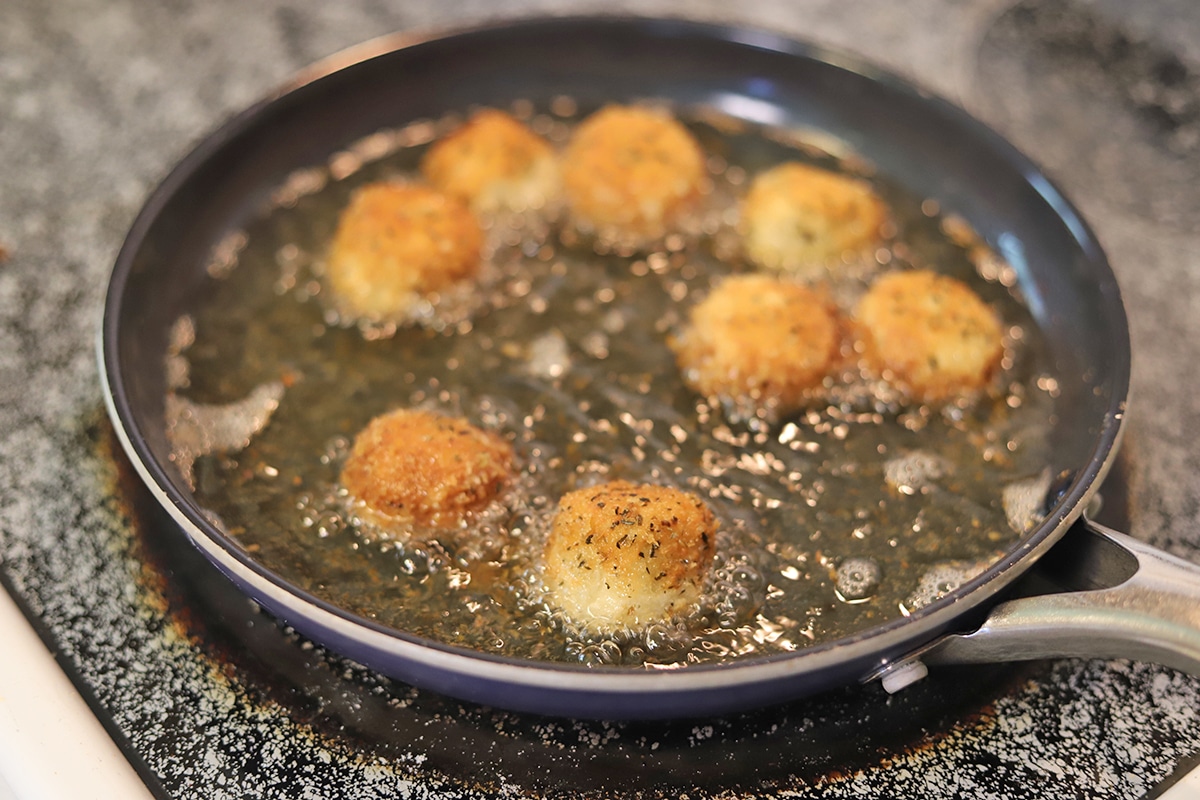 Fry in a non-stick skillet with oil.

As they brown, rotate the cheese balls, so that they are evenly fried all over.

Once they are totally browned, move them to a towel lined plate to drain.

Make it your own

You can make this appetizer your own by varying the ingredients, cheese shape, and size.

While you can certainly enjoy this appetizer all on its own, it’s even nicer with a dipping sauce!

Here are some ideas to get you started: 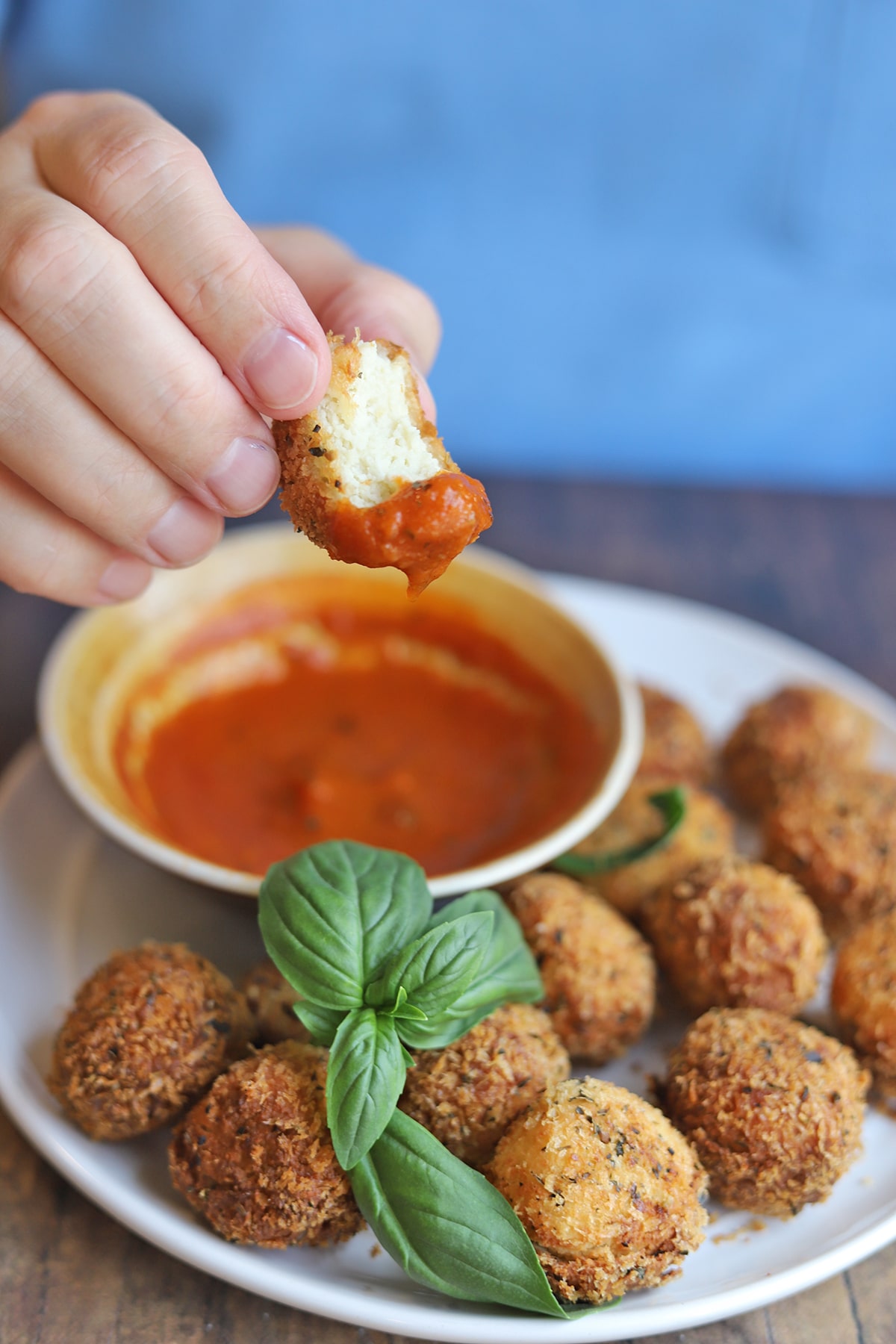 What to serve with them

Make a meal out of fried almond cheese balls by serving them with any of the following complementary dishes. 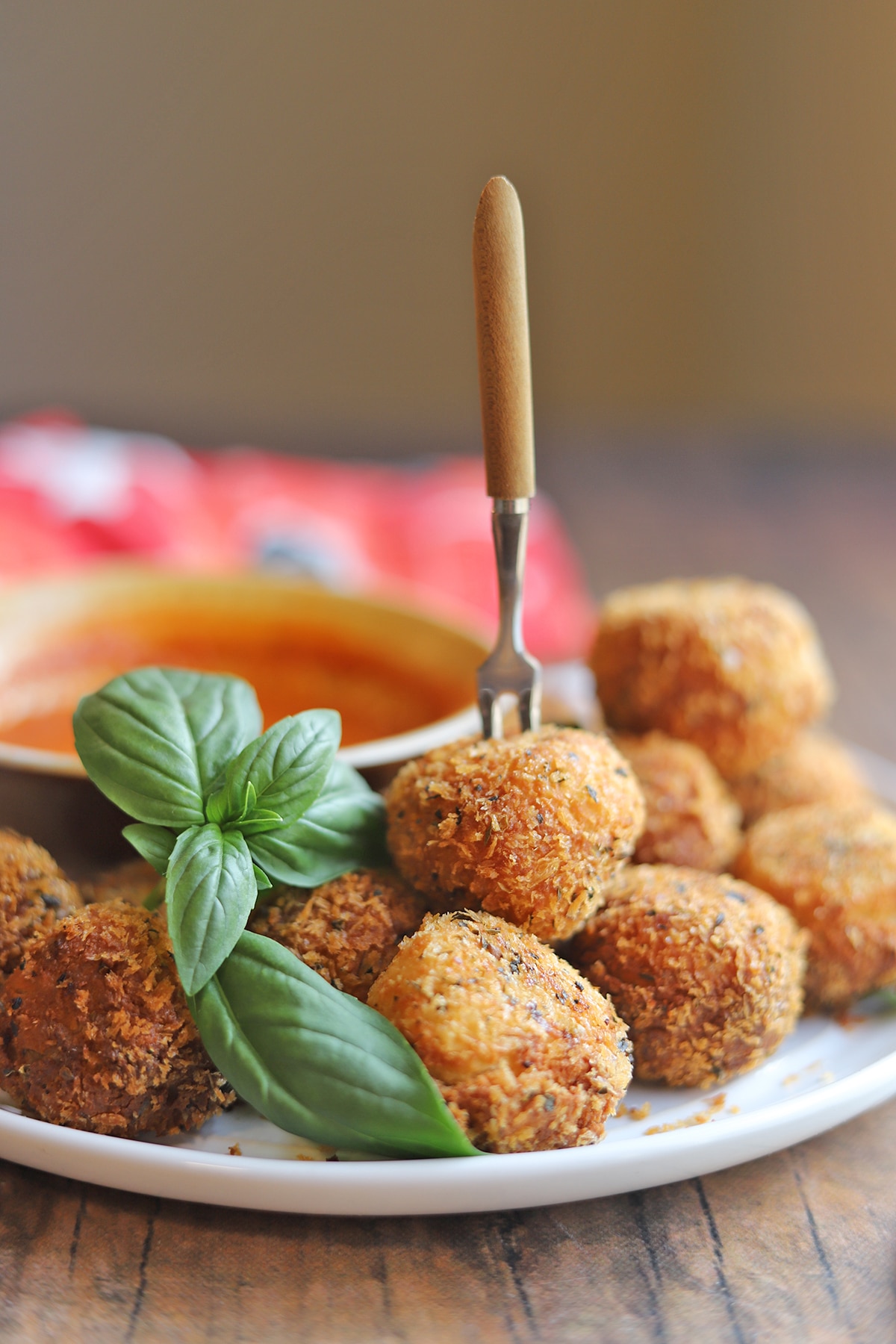 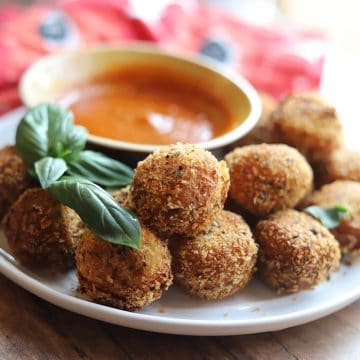 For the almonds, you can either use store-bought blanched almonds, or remove the skins from raw almonds before adding them to the blender. For more information, check out this post on how to blanch almonds. There is enough liquid in this recipe that if you have a high speed blender, you don't have to soak the almonds first. However, if you have a standard blender, I recommend soaking the almonds in hot water for about 15 minutes before blending. Then drain and continue with the recipe as written. Or you can grind the dry blanched almonds in a clean coffee grinder until it has the texture of flour. Then add it to the blender & continue with the recipe. (I don't recommend replacing the almonds with store-bought almond flour, however, because the amounts won't translate the same. A cup of dry almonds don't equal a cup of almond flour.) For the olive brine, use the liquid that's right in the jar of olives. I use Castelvetrano olive brine, which have a lighter, brighter flavor. However, any olive juice can be used. Or use the juice from a jar of sauerkraut or pepperoncini peppers (not hot peppers).

I’m a longtime vegan. (15 years!) But I grew up eating a Standard American Diet. I know that all of us crave foods that are familiar, comforting, and delicious.