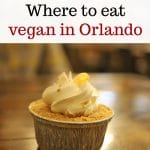 Highlights from Orlando vegan & vegetarian restaurants. Plus, details on who is offering pick-up and delivery options during the current situation.

At the very beginning of February, which now feels like a lifetime ago, David and I spent a long weekend in the Orlando area.

(If I’d known then what I know now, we would have stayed for a week and luxuriated in every carefree second.)

Currently, we’ve spent the last 7 weeks sheltering at home. Who knows when we will feel comfortable enough to venture out for brunch with friends, let alone actually travel somewhere. Barring an unforeseen emergency, I imagine it will be a very long time until I’m hopping on a plane again. I’m hunkered down for the foreseeable future.

But for now, in well-worn pajamas and with Avon on my lap, let’s revisit all the vegan food & fun we stuffed into roughly two days in Orlando… Nice to daydream about until we’re back in brighter days.

Some of the restaurants we visited are currently offering delivery and/or pick-up options. So I’m including that information in case you live in the area.

When I put out my feelers on Instagram about where I needed to eat, Dharma Fine Vittles was the top choice over and over again.

Located inside of Market on South, they specialize in vegan Southern comfort food. In addition to their Orlando location, they have a second one in Tampa, as well as a future location in Sanford.

We squeezed in two trips to Dixie Dharma during our time in Florida. The first time we visited for breakfast. I ordered the drop biscuits and sausage gravy.

In addition to the sausage included in the gravy, the dish had crispy bites of bourbon-maple glazed sausage dotted throughout. It stole the show. It was beautifully caramelized and lightly sweet on the outside.

I asked one of the workers how they make it. She said they use Lightlife breakfast sausage links, cut into bite-sized pieces, and then glaze it.

For whatever reason, I never buy Lightlife products. But if I ever see the sausage links for sale here, I’m totally going to try this at home! I imagine it would also be good with the Field Roast breakfast sausage links. 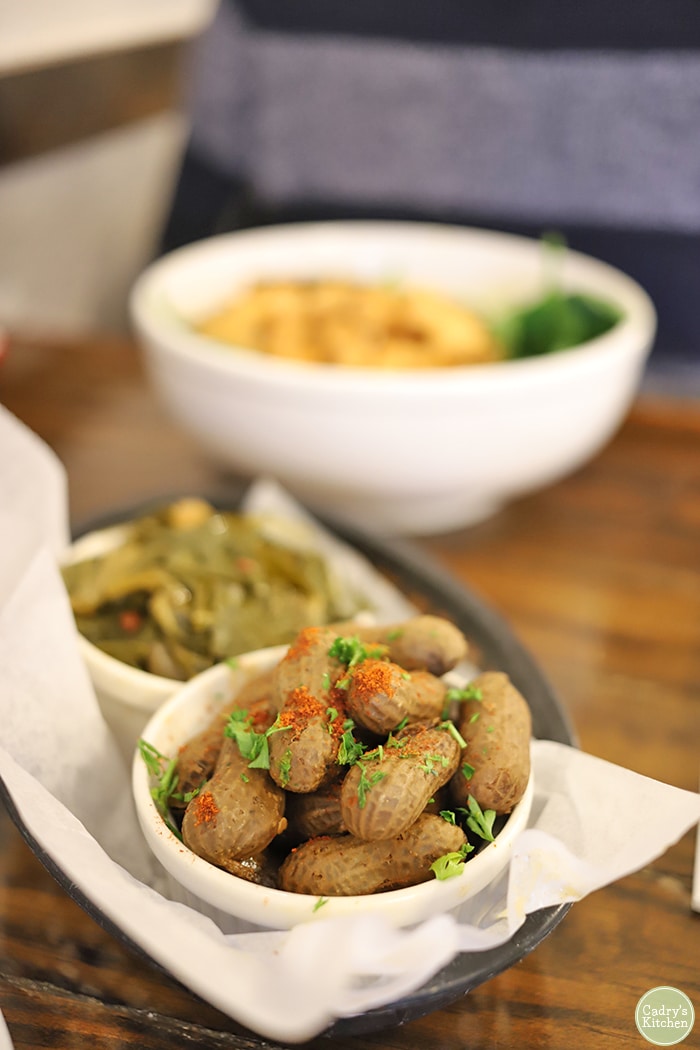 On the side, I had Cajun boiled peanuts and braised collards. I’ve had boiled peanuts before (including a less-than-successful experience at a gas station near Asheville, North Carolina).

But this was everything I dreamed boiled peanuts could be.

They still had a little bit of bite to them, and weren’t completely soft. They were seasoned on the outside, warm, and inviting. (I liked them so much, I had to order them again on our next visit there.)

If you’ve never had boiled peanuts, you may have some questions about them. You don’t eat the shell – just the softened meat inside. (Botanically peanuts aren’t actually nuts. They’re related to peas. And the texture is similar to a chickpea.)

David ordered the Dirty South scramble bowl with dirty rice-style farro, roasted poblano and bell peppers, spinach, home fries, tofu scramble, and a chimichurri sauce. He loved all of the flavors and textures going on in the bowl.

It also came with a choice of sides, and he had crispy Brussels sprouts. Always a winner.

After our breakfast there, I was counting the minutes until we returned again. So we went back the very next day for dinner.

This time I had a fried green tomato sandwich and more boiled peanuts.

The thickly cut breaded tomato was deep fried. It was topped with smoked eggplant remoulade, garlicky kale, and a slightly sweet chow-chow. It was served on toasted Texas toast. 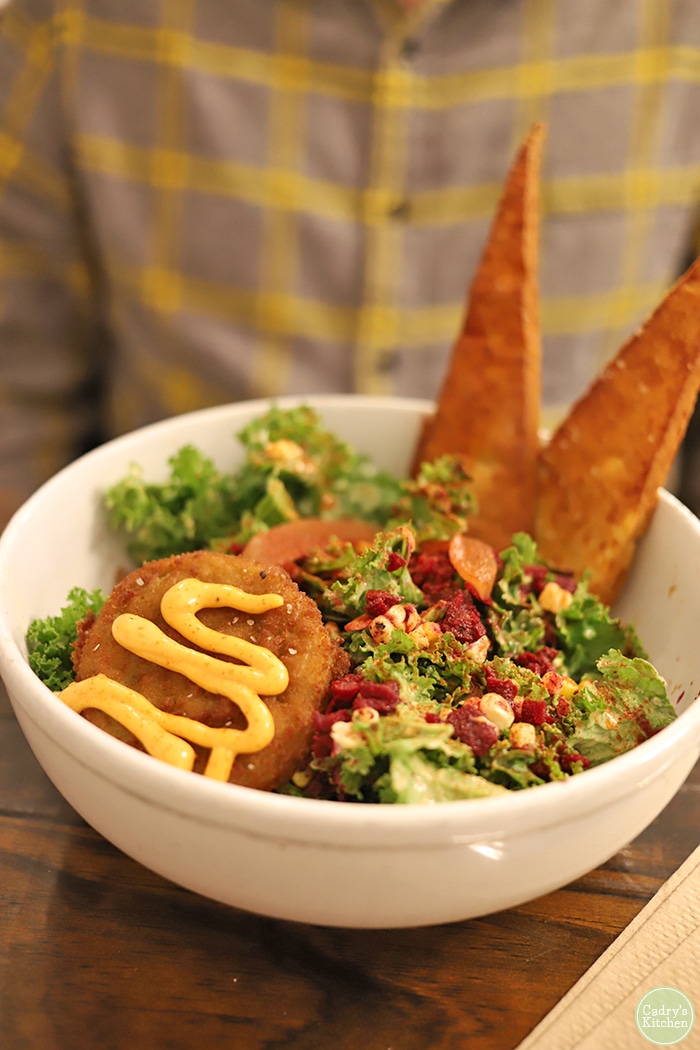 I was curious to try the watermelon rind pickles, which I’d never had anywhere before. It’s more of a sweet pickle with the flavor of cloves, which aren’t my favorite. I’m more of a salty/garlicky pickle fan.

We loved our time at Dharma Fine Vittles, and whenever I get back to Orlando again, it will be my first stop.

Until then, Dixie Dharma is offering online ordering for pick-up or delivery from their Orlando & Tampa locations. At the Orlando location, you can also place an order for the vegan hot dog cart.

Valhalla Bakery is also located inside of Market on South. The bakery cases are set up by the register. And you place your order for Valhalla or Dixie Dharma at the same place.

Valhalla is a vegan bakery. They make full-sized cakes, as well as single baked good options in their display cases.

Everything in the cases looked absolutely sensational. This picture shows just one of the cases.

Banana cream pie is one of my favorite pies. However, it’s usually not vegan. So I was excited to get this mini banana cream pie with graham cracker crust & whipped topping.

It was sensational… Beautifully creamy, thick, and dense. I shared with David, and we enjoyed every last crumb.

Valhalla is currently offering delivery in some parts of Florida. They’re also shipping cake jars nationwide. I’m so tempted to place to an order!

Valhalla Bakery has a sister donut shop, Valkyrie Doughnuts. Although they sell the same donuts at Valhalla, we decided to make a special trip out to Valkyrie to see their selection.

We got a variety of donuts – including classic glazed, very berry, chocolate sprinkle, black & white cookie, and strawberry sprinkle.

The berry was my favorite. But if I had access to a DeLorean, I’d gladly eat every single last one of them all over again.

The donuts are currently available for pick-up, or they offer delivery through Postmates.

In addition to having the best vegan restaurant name ever, Leguminati has the unique menu theme of crunch wraps.

There’s a small bar for seating, as well as dining tables spread throughout the shared space in Hourglass Social House.

We sat at the counter while we were there, and ordered crunch wraps and glasses of wine.

I got the crunch mac with vegan beef crumbles, a tostada, non-dairy sour cream, tomato, and lettuce all wrapped up in a toasted flour tortilla.

Instead of a cheesy queso filling, it was stuffed with vegan mac & cheese. Very tasty.

I snagged a bite, and it was very good too. Although, I preferred the seasoned vegan beef to the unbreaded vegan chicken.

We’d gone to Ethos many times in the past. The veg scene has really exploded in Orlando since we first started visiting the area, but Ethos was one of the originals. They opened in 2007.

The place was jumping when we arrived. All of the tables were full, even though it was around 10 pm. Instead of waiting 20 minutes to be seated, we opted for a couple of open spots at the bar.

Our server told us that a party of 20 had just ordered ahead of us, so it might be a while until our food arrived.

We ordered garlic knots, which David had been looking forward to since about 2015, when we’d last visited.

The buttery knots were topped in vegan parmesan. They were served with marinara and extra melted butter for dipping.

The knots arrived in a cast iron skillet. They were a little underdone and doughy. However, we were both so famished with it being a late dinner & the extra waiting time, we didn’t let that slow us down. 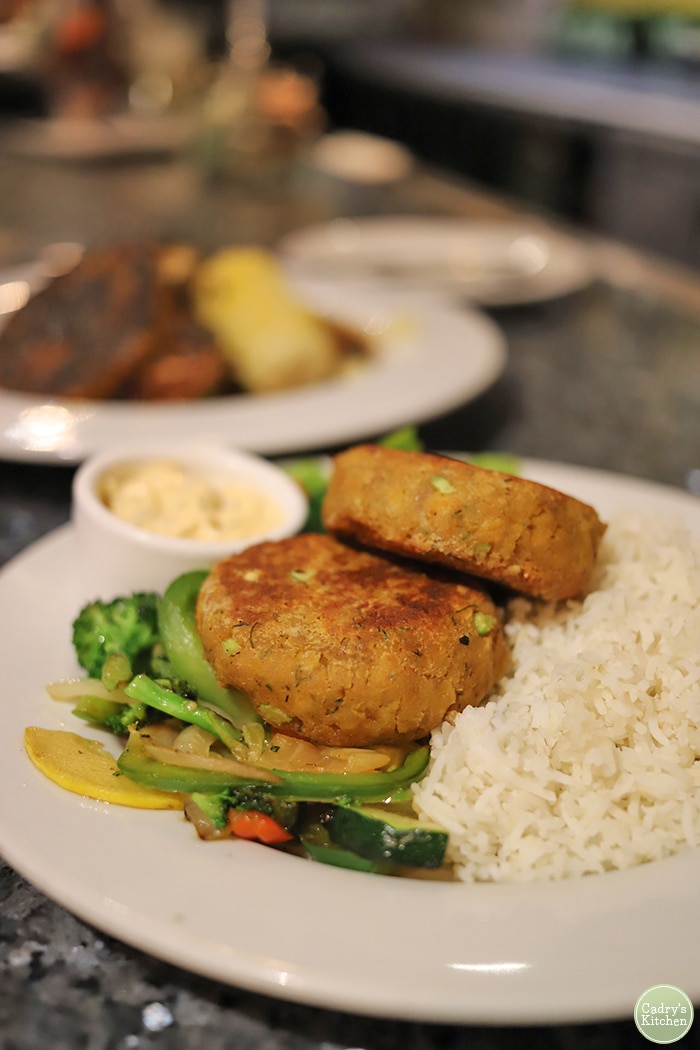 For our main course, I ordered their take on crab cakes called Bay Cakes. They’re made with chickpeas, celery, and fresh herbs. Then they’re browned, and finished with a spicy remoulade.

The cakes had a really nice flavor, and were extra hearty by way of the chickpeas.

(Want to make vegan crab cakes at home? Check out my recipe with artichokes and chickpeas.)

They came with a side of sautéed vegetables and basmati rice. The rice had gotten overcooked and was crunchy. But there was still plenty to eat without it. 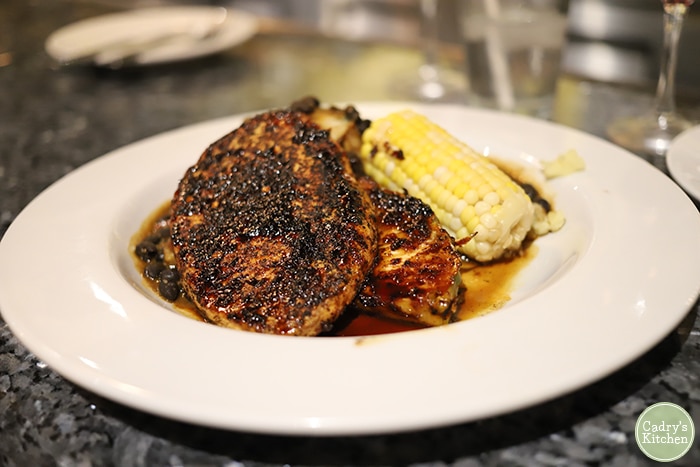 David ordered the jerk chick’n. This spicy pineapple basted chick’n was topped with jerk sauce that had prominent flavors of cloves & nutmeg. It was served with corn on the cob, black beans, and mashed potatoes.

For more vegan Orlando options, check out these posts:

I’m a longtime vegan. (14 years!) But I grew up eating a Standard American Diet. I know that all of us crave foods that are familiar, comforting, and delicious.